Being One’s Own Teacher

Being One’s Own Teacher 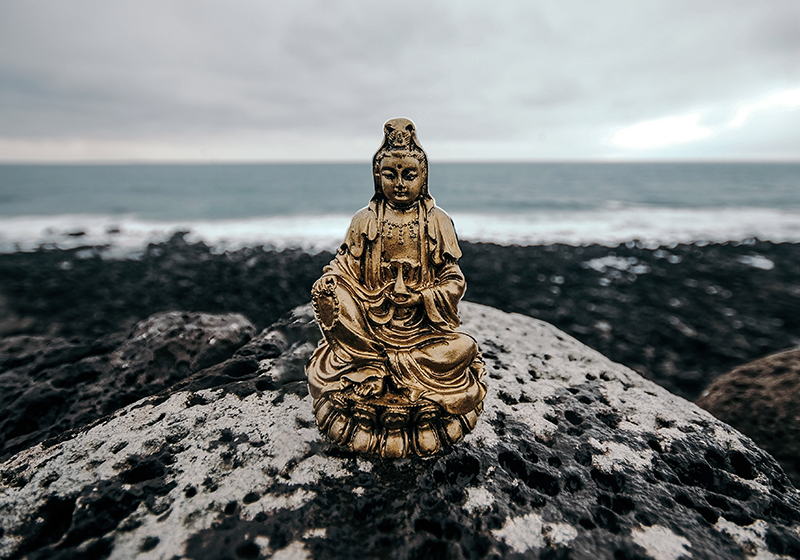 The Kalama Sutta is a much-quoted discourse in which the Buddha radically challenged most sources of religious authority. The discourse is often read as a warning not to seek truth outside of oneself. It is quoted and misquoted as teaching that we should not believe anything unless we know it from our own experience. While the Buddha does advise reliance on what can be known through direct experience he does so in a particular and limited way.

When the Buddha visited the town of Kalama, the townspeople told him they were perplexed about who was speaking the truth and who was speaking falsehoods among the many spiritual teachers who came through town. Just as we, in our modern times, must contend with religious pluralism, so did people in ancient India.

The Buddha responded by telling the Kalamas that it is appropriate for them to be perplexed. Then, instead of telling them who is or is not speaking the truth, the Buddha offered guidelines for how the Kalamas can overcome their doubt on their own. This began with his famous statement not to rely on the common sources of religious authority. He said, “Do not go by oral tradition, a teaching lineage, common talk, scripture, logic, intuition or reasoning, or by reason of the competence of the speaker, or because he or she is one’s own teacher.” This does not necessarily mean that these sources have to be avoided entirely. Rather it means that standards other than these are needed to ascertain what is true.

If these sources are not authoritative, what’s left? For the Buddha it is those things that one can know and directly experience for oneself. This suggests that each person can and perhaps should be his or her own spiritual teacher. Some find this idea inviting, others find it daunting. But, either way, we must understand the particular way in which the Buddha is saying that one can rely on oneself. Naive self-reliance can lead to as many problems as naive reliance on scriptures or teachers. The Buddha is very particular about which direct experiences to focus on and how to act in relationship to what we know.

The Buddha suggested using our experience of suffering and happiness as our guide. The assumption is that people don’t require scripture, teachers, or reason to know whether they are happy or not. The path to freedom from suffering begins and ends with our basic ability to recognize when we are suffering and when we are not. However, this does not mean we should discard scripture, teachers, or reason; they can have an important role in pointing us to areas of suffering and happiness that we may be blind to.

With the human experience of suffering and happiness as the basis, practitioners then consider both by themselves and with the help of wise people (so as not to fool or under-challenge themselves), which mental qualities, states, and teachings lead to suffering or happiness, to harm or benefit. Those that lead to harm should be abandoned and those that are beneficial should be engaged in. This doesn’t require exhaustive analysis; it necessitates paying attention to the consequences of our mental, verbal, and physical activities so we can know for ourselves what brings suffering and what brings happiness. It also involves using our reasoning and imagination to understand what is likely to bring us harm or benefit. Then based on this, if it brings suffering, avoid it; if it brings happiness, engage in it.

Since the Kalamas had said they were perplexed, the Buddha concluded by describing practices that would provide some degree of assurance. He did this by talking about some of the results that can come from the practices of loving- kindness, compassion, appreciative joy, and equanimity. Perhaps it was because the people of Kalama were not his students that he discussed these four “divine abodes”—they were practices widely known at the time. If the Kalamas had asked about liberation, the Buddha would have responded differently—most likely by describing the practices that lead to liberation.

One assurance is that with proficiency in loving-kindness and the other three abodes one will experience happiness in this lifetime; one can know for oneself that these practices are beneficial. A second assurance is that, if there is rebirth, one can be assured of having a good rebirth. Still another is that if malicious intentions bring suffering, one can be assured that one is not causing oneself further suffering. While the first assurance is experientially testable, the second and third are a form of Pascal’s Wager: without having to decide on the truth of rebirth and the negative karma of malice, one can be at ease knowing that proficiency in loving-kindness is in one’s best interest if these are true. For people who aren’t going to try out the path of liberation, perhaps this is as good an assurance as one can get.

It might seem a little strange to end a teaching about relying on what one can know for oneself with a discussion of what is reassuring. Maybe this is because the English word ‘assurance’ doesn’t quite capture the meaning of assasa. The Indian word literally means ‘breathing’ and figuratively means to breathe easily or freely, as well as to be ‘assured’ or ‘comforted.’ One way or another loving- kindness practice helps people to breathe easily.

Ease in breathing might seem trivial. It is not. It is an important pre-condition to happiness and liberation. The more relaxed the breathing is the more sensitive we can become to subtleties of suffering and happiness. Because our inner life and psychology closely influence how we breathe, the quality of our breathing can reveal much about what is happening in the mind. The more easeful the breathing becomes, the more ease-filled is the mind. In contrast to spiritual teachings that are too abstract or distant to be experienced directly, a person can know whether he or she is breathing easily. And, as an alternative to complex analysis, a person can direct the mind toward attitudes and ways of being that bring greater ease and pleasure in breathing. Being guided by our breathing, we can learn a lot about what we should do and what we should let go of. In this way our own breath provides the direct experience that can help us be our own teachers.