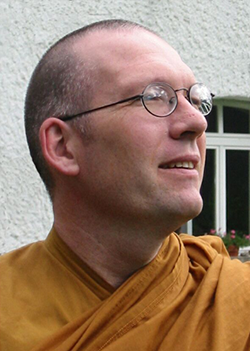 Bhante Sukhacitto is a German Theravadan monk since 1990 and was originally with Ajahn Buddhadasa in Thailand. 1993 he returned to the West and lived several years in branches of the Ajahn Chah monasteries in Switzerland and the UK. Since 2005 he practices Insight Dialogue and was trained as a teacher and teaches worldwide. 2016 he established near Hannover, Germany Kalyana Mitta Vihara – House of Noble Friendship, a small Dhamma Community and Meditation Centre.