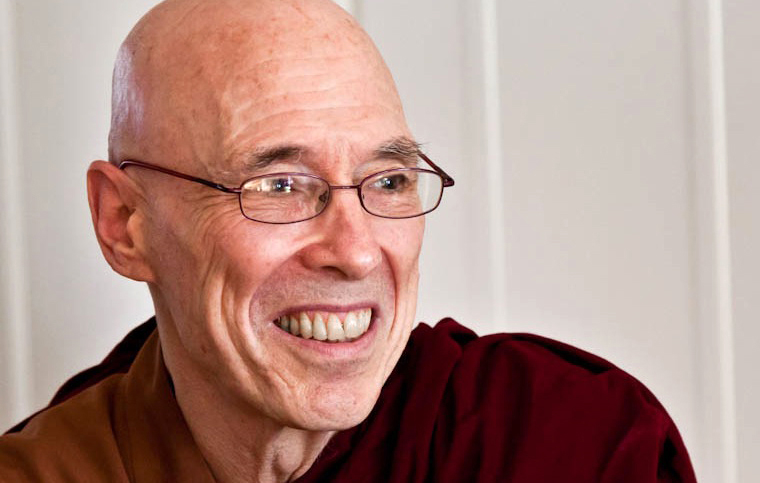 with Bhikkhu Bodhi and Guests

Anthropocene: /ˈanTHrəpəˌsēn/ “The period during which human activity has been the dominant influence on climate and the environment.”

Wildfires in the west, flooding in the northeast, extensive groundwater loss in India and droughts in Central America that prompt thousands of small farmers to flee the countryside in an exodus of survival. These are just a few examples of suffering from man-made climate change. There has to be something we can do, but what? The answers are different for everyone, but they all stem from the place of action, or, Right Action.

Right Action, as part of the Noble Eightfold Path, describes a way of living that is committed to refraining from harming living beings and taking what’s not given. How can we apply this moral concept to our lives when so much of how we live is predicated on modes of harm: driving increases carbon emissions, raising cattle for human consumption and even growing rice increases atmospheric methane concentrations? Heating and cooling our homes, using plastic bags when we buy our groceries–all these actions drive us ever closer to the tipping point of climate change. What, then, is the ‘right way’ to live in the Anthropocene?

We’ll begin with a panel discussion Friday night with leaders at the forefront of the climate emergency. They’ll help us understand our part in global warming and what we can do about it. On Saturday we’ll deepen our understanding and hear from activists in the field. We’ll also hear from climate leaders in Africa, in Zambia and Zimbabwe, on how the actions of the global north are affection billions in the global south.

Join us for this important event as we explore the causes and conditions that have brought us to this place in time, the dukkha of extinction and human suffering, and the solutions that we can bring to bear in this critical time of our world.

Please register at the highest level that your generosity offers.
Explanations of levels follow below.

New York Insight Meditation Center has streamlined the registration fee levels. Members of our Circle of Friends are eligible to receive 20% off of the Sustaining Rate via a code provided in the email confirming membership, which you can enter after clicking the Sustaining Level registration.

*Benefactor Level: Supports NYI’s ability to offer the Subsidized Base.

**Sustaining Level: This level reflects the actual costs to support this program. Circle of Friends members eligible for 20% discount with code. Click here to join.

***Subsidized Base: Made possible by the generosity of Benefactor Level above and other donations to ensure participation by those requiring financial assistance.

If you are unable to pay the Subsidized Base Fee, you can learn about volunteering to offer work exchange and letting us know how much you are able to pay for this program by emailing registration@nyimc.org. 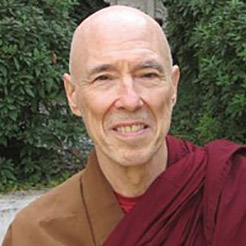 Ven. Bhikkhu Bodhi is an American Theravada Buddhist monk, originally from New York City. He received novice ordination in 1972 and full ordination in 1973 and lived in Asia for 24 years, primarily in Sri Lanka. A Buddhist scholar and translator of Buddhist texts, he is also the founder of Buddhist Global Relief, a nonprofit supporting hunger relief, sustainable agriculture, and education in countries suffering from chronic poverty and malnutrition. An ardent promoter of Engaged Buddhism, Ven. Bodhi is consistently at the forefront of climate justice, and has participated in too many marches and protests to count, including the March for Clean Energy, in Philadelphia, the People’s Climate March, in Washington, D.C., and protests with the Poor People’s Campaign in Albany. In addition to his on-the-ground work, Ven. Bodhi has addressed the the climate crisis with talks both in the White House and the Hall of the United Nations General Assembly. He lives and teaches at Chuang Yen Monastery in Carmel, New York. 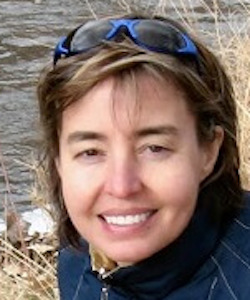 Kristin Barker is exploring what it means to practice a Buddhist response to environmental and social injustice. She is dedicated to cultivating broad-scale awakening to authentic earth relationship through meditation, sustainable living and advocacy. Kristin is a teacher and board member with the Insight Meditation Community of Washington (DC), former board member of the Buddhist Insight Network, a GreenFaith fellow and graduate of the Community Dharma Leader program through Spirit Rock. Kristin is also a co-founder of White Awake whose mission is to develop awareness of race dynamics among white people. She holds a Master’s in Environmental Management from Duke University, has worked as an independent consultant and staff member at several environmental organizations. Kristin is a native of New Mexico and currently lives in Washington DC. 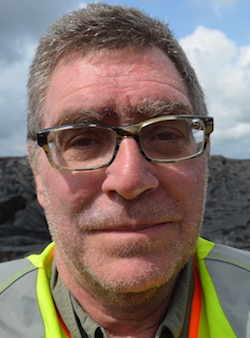 Kevin Krajick is the Earth Institute’s senior editor for science news. He was born in a place that no longer exists, and grew up in the Catskill Mountains and Hudson Valley of upstate New York, where he started in journalism at his high-school newspaper. He has since reported from all 50 U.S. states and 30-some countries, covering science, criminal justice, immigration and other subjects. His work has been featured in National Geographic, Newsweek, The New Yorker, Science, Smithsonian and many other publications.
He was a 1981 finalist for the National Magazine Award for Public Service for his reporting on organized crime’s links to the toxic waste-disposal industry. Among other honors, he is two-time winner of the American Geophysical Union’s Walter Sullivan Award for Excellence in Science Journalism, and his work has been featured repeatedly in the yearly book “Best American Science and Nature Writing.” His 2001 book “Barren Lands” is the true account of how prospectors discovered diamond mines in Canada’s remote far north. Krajick holds degrees in comparative literature and journalism from Columbia University. He lives on the Upper West Side of Manhattan with his wife and two teen daughters.

Reverend Damon Mkandawire lives in Mebereshi, Zambia, where he serves as a minister with the United church of Zambia. He is an environmentalist, theologian and gender activist. Growing up surrounded by copper mines, Damon has firsthand knowledge of environmental degradation and its potentially deleterious impacts on human health and welfare. Zambia, like much of Africa, sits at the the cross-section of climate change environmental exploitation. He has frontline experience of living in an extraction economy that views the natural world as merely a means to an economic end. Damon spent years as an Environmental Officer at the Konkola Copper Mines, one of Africa’s largest producers of copper, and continues to work towards national and international environmental justice. 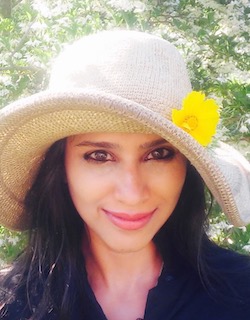 Shephali Patel is a farmer-ecologist, educator, and writer. Her work is split between building models that display the interconnections between soil, agroecology and ecological health; and empowering others to use this knowledge to create positive changes in their communities and in their own lives. Over the past seven years, she has been shaping landscapes of the mind, heart, and Earth at Stone Barns Center for Food & Agriculture, Snug Harbor Heritage Farm, Just Food, The Jane Goodall Institute, Eagle Street Rooftop Farm, and The Metropolitan Museum of Art. Working with the wisdom of the natural world has reconnected Shephali to the elemental and revolutionary dimensions of the yogic, healing, and devotional traditions of her ancestors. More importantly, it has gifted her with immeasurable and invaluable moments to connect to nature in a way that continues to teach her how to reclaim the dignity, humility, and mystery of being a human being on this planet. Her latest published essays include “Darshan” in Spiritual Ecology (2nd edition, 2016) and “Sacred Soil” in Parabola Magazine (Fall 2017). 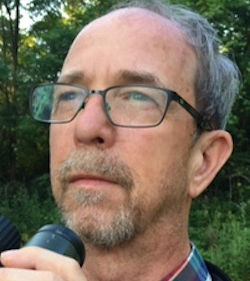 Stephen Roylance has been birding since he was 10 and has since birded in Ecuador, Costa Rica, Guatemala, Panama, Alaska, and Newfoundland. He has witnessed birding migration patterns changing due to global warming. He first confronted the tragic relationship between birds and the destruction of the environment with the extinction of the Dusky Seaside Sparrow in 1987. Since then, he’s seen a decline of too many bird species. His personal experience in seeing this decline has led him to get in touch with the very real grief we all experience when we understand what global warming means for our planet. This grief, he believes, is the touchstone to action, but only if we allow ourselves to access it. 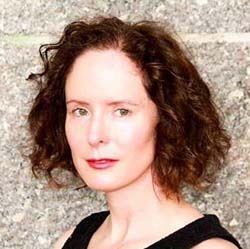 Regina Valdez became an acolyte to Earth’s majesty the first time she stood at the cliffs of Monterey Bay. An environmentalist of many years, Regina has marched, read, written and spoken on behalf of Mother Earth’s sanctity. Her writing has appeared in Lion’s Roar, The Elephant, and Tricycle Magazine. An Engaged Buddhist, she completed EcoSattva training through One Earth Sangha, helped form New York City’s Draw Down group, is a GreenFaith Fellow and Climate Reality Leader, trained by Al Gore and the Reverend Dr. William J. Barber, II. An adherent of the Thai Forest lineage and member of the Community Dharma Leaders 2019 cohort, she looks forward to twining the dharma’s natural and environmental roots to traditional ecoDharma teachings. 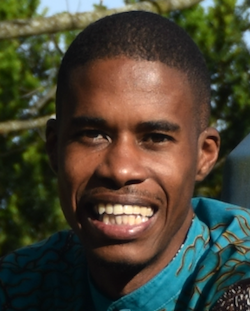 Reverend Massango R. Warakula, an Ecotheologist, grew up in Zimbabwe, land of the Shona/Ndebele people, whose spiritual understanding was informed by the surrounding environment. Mountains, rivers, trees and animals were all held as sacred. Everyone in Zimbabwe belongs to a certain animal totem and indeed, Massango’s very name means ‘tree.’ During his lifetime, however, he’s borne witness to the corporatization of natural resources. Rivers once deemed sacred were turned into waste dumps. Sacred mountains and shrines were destroyed, and water borne illnesses such as cholera and typhoid proliferated. Having traveled to Geneva to attend a Green Churches Conference organized through the World Council of Churches, Massango continues to work for goodness, justice, and environmental stewardship.